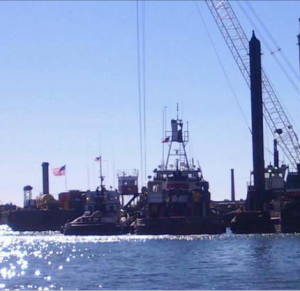 Project Summary:
From February 1 through May 30 of any year, an approved marine mammal observer must be present aboard disposal vessels transiting between a dredge site and the Massachusetts Bay Disposal Site during daylight hours. Disposal vessels including tugs, barges, and scows, shall operate at speeds exceeding 5 knots after sunset, before sunrise, or in daylight conditions where visibility is less than one nautical mile. Disposal shall not be permitted if these requirements cannot be met due to weather or sea conditions. In that regard, the permittee and contractor should be aware of predicted conditions before departing for the disposal site. The intent of this condition is to reduce the potential for vessel collisions with endangered species, including right whales and sea turtles.

Scope of Work:
When threatened or endangered species were observed to be present, the vessel captain would, except when precluded by safety considerations, follow the advice of the Fathom Resources (Fathom) marine mammal observer to avoid harassment of or direct impact to individual animals.