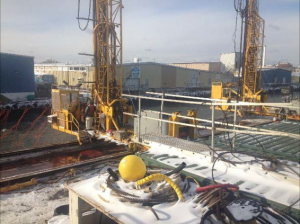 Project Summary:
The construction of the New Bedford Marine Commerce Terminal included dredging of the adjacent shipping channel. Dredging of the shipping channel to mandated depths, required the blasting of bedrock, which inhibited dredging operations. As a result, marine mammal and protected species observation was required by the NMFS, EPA and Mass DMF during all blasting operations.

Scope of Work:
Fathom Resources (Fathom) conducted pre and post blast monitoring for the presence of fish and marine mammals (seals) in the projected impact zone immediately prior to the initiation of blasting utilizing sonar and a NMFS approved observer. When fish and seals were detected within the impact zone, a fish and seal startle system was deployed by Fathom.

After the completion of each blasting event, the Fathom observer monitored the area within and near the impact zone, looking for fish that may have been injured or killed. Monitoring commenced immediately following the completion of each blasting event and continued until no more bodies are recovered. Dead and injured fish were counted and sorted by species and the information was reported to EPA. Blasting would cease during the passage of schools of fish or when a marine mammal was present, as determined by Fathom observers.

The following information was collected daily