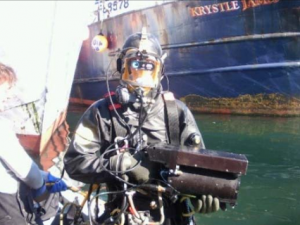 Project Summary:
During construction of the NBMCT, many activities (including dredging) may have a temporary detrimental effect to the fish that may be present within New Bedford Harbor. A Fish Monitoring Workgroup (including members from NMFS, EPA and Mass DMF) was convened to prepare a Fish Deterrent Plan that could be utilized to reduce the impact to fish by excluding them from a proposed area. The input from the Fish Monitoring Workgroup was incorporated into a Fish Deterrent Plan. This Fish Deterrent Plan (FDP) included all measures to be taken that decreased the chance of mortality to marine species of concern and their spawning activities (where applicable), including: Atlantic sturgeon,
Winter and Windowpane Flounders, Scup, and Anadromous fish species as directed by the National Marine Fisheries Service (NMFS).

Scope of Work:
Fathom Resources (Fathom) performed weekly monitoring of installed fish exclusion devices (silt curtains and bubble curtains). Monitoring was first implemented one day after the initial fish exclusion efforts are undertaken and once a week thereafter. Surveys were performed with a sonar fish finder and a towed video system. The perimeter of the area will be surveyed twice. First to verify the silt curtain and bubble curtains were in place and second to verify the associated weir leader net was in place). Then the dredge area was surveyed to determine if fish were present using the following procedures: